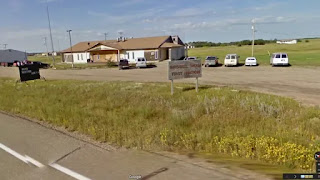 Dakota Pratt, a 28 Year old Resident of the Birdtail Sioux First Nation Was Sentenced to 5 Years in a Manitoba Court today for defending his home after he woke up to what he described as "a feeling of being stabbed in the head". There before him was a knife wielding intruder, described in the CBC article that originally covered this story as a man named Bunn, attempting to take his life.

So, in an attempt to defend his life and his Dakota chased him into the hallway and begin struggling with his assailant in an effort to save his own life.  Pratt seized control of the attackers knife and stabbed Bunn 13 times. One of these stabs Pratt made landed in his attackers chest. He kicked his attacker several times afterwards. This is an understandable reaction if you wake up in the middle of the night and someone decides to try to kill you. It is definitely a story that makes sense, he had significant wounds to his scalp and received significant blood loss during the attack.

If you break into someones house and get killed in the process, from a moral pespective the answer should be tough shit. Especially if you are using a knife to try to kill someone. The head holds some of the most vital organs in the human body and Dakota Pratts attacker could have without a doubt killed him.

The Canadian standard for self defense is a joke. Until it isn't funny. Canadian self defense law deems it illegal to do anything that is considered "beyond reasonable force". to be exact, the law says:

34. (1) Every one who is unlawfully assaulted without having provoked the assault is justified in repelling force by force if the force he uses is not intended to cause death or grievous bodily harm and is no more than is necessary to enable him to defend himself.

Of course, there are times where sometimes killing the other person is sadly the only reasonable option to defend ones own life. The Canadian Criminal Code makes an exception for these circumstances:

Once someone begins going for your head and attacking you with a knife, it is beyond reasonable to think they are trying to kill you. They certainly aren't trying to give you a hug. When two people are struggling over a knife, it can go either way if it falls into the wrong hands. Under Canadian law, it is certainly reasonable to assume that Dakota Pratt was in the right from the laws written for self defense. What kind of a country are we living in when saving your own life can get you 5 years in prison? That wasn't enough for the crown prosecutors, oh no.

You would think, clearly this man must be some big time drug dealer. He must have had a significant criminal history for the courts to have given him such a hard time. In actuality he didn't. He only had one blemish on his record which was an assault. Not assault with a deadly weapon, not sexual assault, just assault. An unfortunate human mistake in this mans past many people of all backgrounds make the mistake of doing. Something far behind him.

This is what the courts definition of justice is turning into in our country. A man that had someone try to kill him can now not survive the incident without serving five years in prison, despite the fact he had every legal right to defend himself. The courts clearly broke the law in sentencing this man, and violated his right to security of the person under the Canadian Charter of Rights and Freedoms. There is nothing about the courts actions that were just, or moral, or in the interests of the him, the citizen or Canada. It was nothing short of an act of government tyranny.

It is time for Canadians to ask themselves, for cases of self defense, how are the courts reasonable force on reasonable people? Who is really the criminal in this situation, the citizen defending himself, or whoever sentenced him? I'll let you decide.

I hope you liked article. If you are reading this, and want to stay tuned in to hear the voice of conservative truth, exposing the lies of the Mainstream media and the nationalist populist take and stories about the corruption that is going on in our parliament, follow us on Facebook, subscribe to our blog, or add us on instagram and twitter to get updates on whats going on. We are an independent blog that stands for Canadian Nationalism and a populist view point on politics, and we thank you for reading. We could not do this without Canadian Patriots like you, and appreciate all the support.
Facebook: https://www.facebook.com/TheCanadianPatriotReport/?modal=admin_todo_tour
Twitter: https://twitter.com/TheCanadianPat5
Instagram: https://www.instagram.com/canadianpatriotreport/?hl=en
Posted by Kurt Scotsdale at 11:33 AM